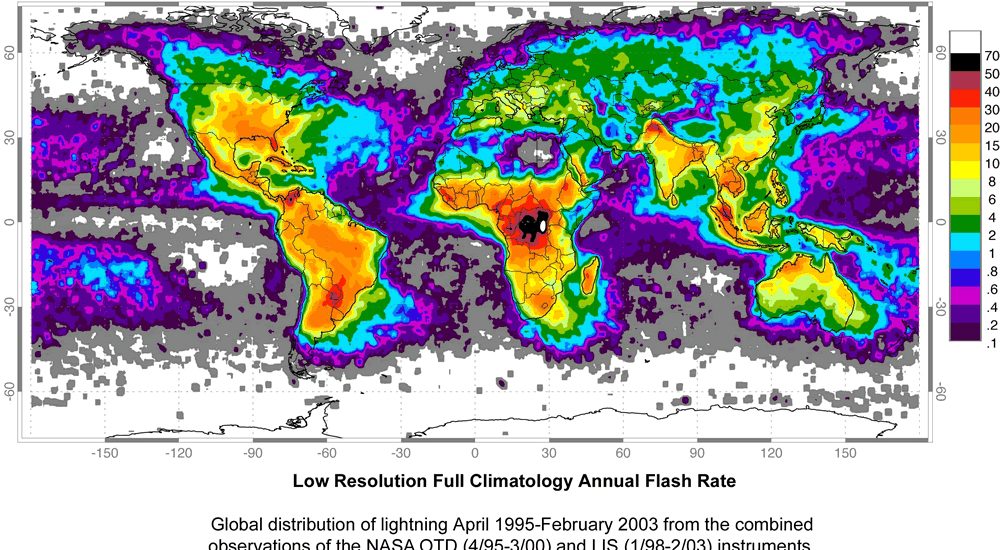 Even today, scientists do not know everything related to what goes on during a lightning strike. Research is ongoing world wide to better know and understand this – the most destructive of nature’s phenomenon.

Some things are certain though.

The distribution of lightning is not uniform over the entire globe.

How does lightning form?

Lightning, a flow of electrical current between the earth and storm clouds, occurs as varying charges of positive and negative polarity build up in the atmosphere during a storm. The result is a discharge or current sent rushing toward the earth. As this downward force nears the earth’s surface, positive charges rise up to meet it. As the negatively charged stepped leader thrusts toward the ground readying to discharge its energy, its path is erratic. Nearing the earth, positive charges are attracted by it and strain up from roof edges, chimneys, roof HNAC equipment, lighting poles, antennas, etc. When the two opposing charge systems meet, they create a closed circuit. As the path to the ground is completed, a flash is created.

What happens when a structure is struck by lightning?

A lightning strike to an unprotected structure can be catastrophic. Packing up to 100 million volts of electricity and a force comparable to that of a small nuclear reactor, lightning has the power to rip through roofs, explode walls of brick and concrete and ignite deadly fires. In addition to structural damage, lightning effects are not just limited to the physical structures they hit. Inside, organizations experience the following financial, safety and operational impacts from direct lightning strikes

Lost revenues each hour of broadcast and communications downtime

Most Important Risk of injury or loss of life